SHIFT HAPPENS: Retro-commissioning Can Get Buildings Back in Shape 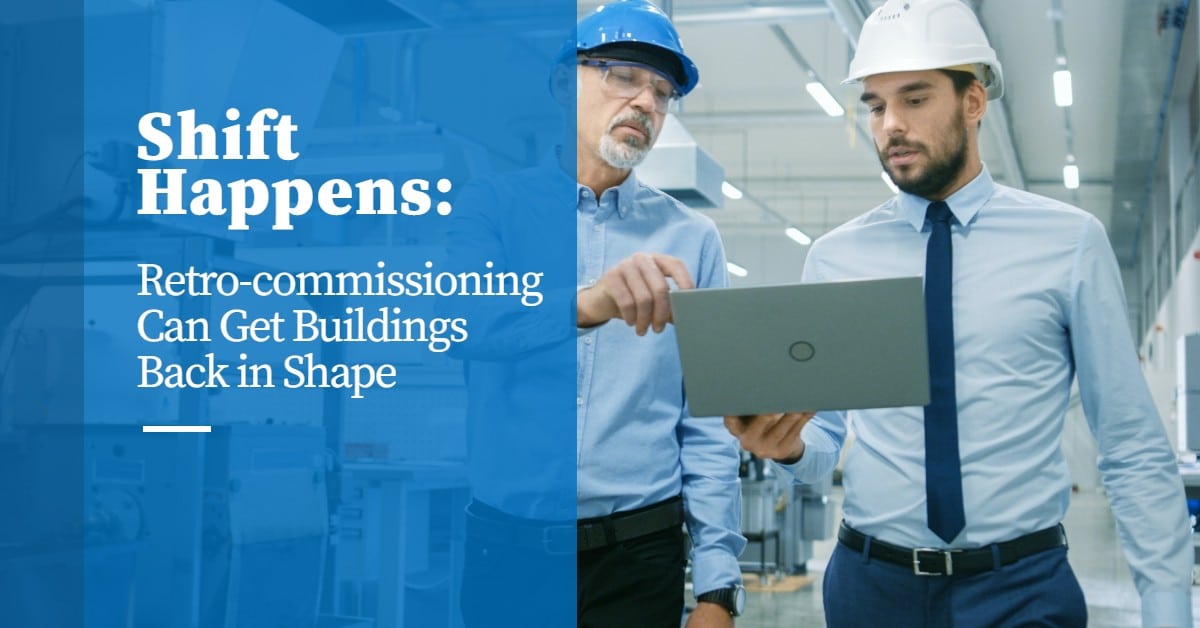 The other morning, I woke up with some back pain. I didn’t think much of it because – let’s face it – I’m of the age where occasional pain of any sort is a way of life. I managed to get loosened up, and then went about my normal daily routine. But the pain didn’t go away.  It steadily got worse to the point where I was starting to hobble around. At that point, I decided that a visit to the doctor was in order.

As I reflected on my plight on my drive over to his office, I was struck by the idea that buildings aren’t a whole lot different from people. I know… I’m such a gearhead… but the parallel is there. Think about it. The HVAC systems inside buildings are a lot like our bodies’ systems. For instance, the heart is at the center of our bodies. If it stops, we stop. Same thing with a chiller in a building. If the chiller system goes down, the HVAC stops, and the building will soon be uninhabitable.

And there are more similarities. Our bodies have lungs to supply us with oxygen; buildings have air handling units to supply them with air. We have kidneys to remove waste from our bodies and buildings have cooling towers to remove waste heat from the space. And of course, we have brains to control all of our functions where a building has a building automation system (BAS) to control its equipment. I could go on, but my analogy begins to break down when I get to, say, the foot. But needless to say, as time passes our bodies tend to change often becoming less efficient. The same goes for buildings. Shifts in how equipment is used or how the building itself is used can make the facility less operationally efficient.

So, when I got to my doctor’s office, he did what all doctors do – he examined me. Asked me where the pain was, how long had it been going on, how severe was it. Then he took an X-ray of my back and came up with a diagnosis: I had a rather rare birth defect of the lower spine that tended to cause pain periodically. That didn’t sound good, so I asked him what the possible treatments were. He indicated that there were two different ways I could approach the problem. I could do some exercises and take some pain pills whenever the pain got bad enough, or I could have back surgery and probably eliminate the whole thing.

On my drive back home, I was now convinced that my body’s organs and an HVAC system have more in common than not. An HVAC system typically starts life running at peak efficiency. But over time, things begin to change or shift. Maybe a setpoint was changed (a little ache); or the system becomes dirty or fouled due to normal wear and tear (like a bone spur). But left unattended, those slight changes can cause the rest of the system to work harder to maintain comfort levels. And working harder means consuming more energy.

The changes are slight at first but become more noticeable over time until at some point you decide that you’ve had enough. What to do? The answer should be obvious – see a doctor, a building doctor. In reality, he or she is a mechanical engineer who specializes in the practice of retro-commissioning or RCx.

Retro-commissioning is a methodology that examines all aspects of a building’s operations one by one and then again as a whole. The goal of RCx is to get the building back into peak energy and operational efficiency, given that the building may or may not be functioning as it was designed to when it was built (shift). I once retro-commissioned a space that was originally designed as a restaurant but was now operating as a law library. No one had thought to look at the HVAC system when that drastic change, or shift, was made, and the new owner wondered why they were having overcooling problems.

So what does a building doctor, an RCx specialist, do? Actually, it’s very similar to what your medical doctor does. First, she’ll sit down with you and your operations personnel and ask about symptoms. When did you first notice the pain (increase in your utility bills)? Is it severe? When do you feel it (summertime? winter months? on start-up?). Then she’ll get the building’s vital signs. She’ll go over the historical building energy use (like doing blood work) and then get trends from various pieces of equipment to analyze, similar to getting an EKG or an X-ray.

Once the data is compiled, the RCx agent will come up with a list of findings, a diagnosis of sorts. For instance, he might find that your building cooling tower water is running a fever – it’s running too hot. That in turn is causing the chillers to work harder and consume more energy. At first glance, the cooling tower might be tagged as the culprit because it just isn’t doing the job. And that might be true because the tower is showing some signs of scaling. But on further analysis, the real issue might be in the control of the tower pump flow.

A less resourceful inspector might decide that the only solution to your problem would be to replace the tower in a capital project. That’s major surgery. But our diligent RCx agent would have a different treatment possibility: address how the tower pump is being modulated and to set a minimum speed to cover the tower’s minimum flow rate. This would involve only that the VFD on the tower pump be programmed with a minimum speed. This is a low-cost/no-cost energy conservation measure (ECM) that forms (the) basis of retro-commissioning. This is the equivalent of just taking your meds.

When you look at these options, it’s easy to see the parallels I mentioned above. The problem of your ever-increasing energy bills is just like my back pain. It was tolerable for a while, but at some point, you have to take action and see the doctor. And just as with my back, the RCx expert (doctor) will discuss your issues, observe your symptoms, take readings, and then offer a remedy that will alleviate your problem.

In this example, retro-commissioning says to make an adjustment on the pump VFD (take the pills).  This is a shorter-term (2 to 4 year) fix for the building. After that time, the RCx agent may be needed again to assure that the VFD change was still the right one and see if any other shifts have occurred. The other solution, replacing the tower with a better selection, should solve the problem permanently just as surgery should solve all my back woes. But this is one expensive and scary solution.

As you can see, shift happens. It happens in our bodies just as it happens in our facilities. Retro-commissioning offers the building owner/manager the opportunity to examine existing building operating systems and determine low/no-cost changes to get them operating at peak efficiency without resorting to equipment replacement and expensive capital projects. Major surgery isn’t always necessary to effect a major change in your building’s health. Often, just taking the meds is the prudent course of action.

Ready to get started on the path to energy efficiency and sustainability?